We are thrilled to introduce a new Feature from longtime friend, teacher and Expo Reader Annette Noyes! Each month Annette will draw a card and give us her interpretation based on her extensive knowledge and studies. 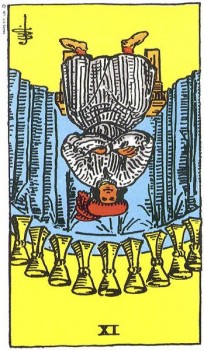 Nine of Cups, reversed (that means upside down, not a "bad thing" simply a change of energies):

Nines, generally speaking, represent completing a big project or endeavor. Examples of that would be graduating high school, college, a training program, military basic training, etc. You may be coming to the end of setting up a new business or have just bought a house after long searches and endless paper work. But even though you've worked very hard for something, and the end to all that toil is near, it's not time to rest on your laurels and coast. "Complacency" is the big message of this reversed Nine of Cups, and I want to stress that we don't want to park it with our feet up just yet.

There's more work to be done before it's Miller Time. In fact, through more hard work, something may come to light...a "D'oh!" moment where something you thought was settled turns out not to be. Maybe your new computer networking system goes down, or the gently used restaurant cooler you got for half price blows a gasket.

You're also going to figure out who your real friends are, and who are just beer buddies. Not that beer buddies have no place in our lives. They're great! But when you need real help, they're not the type to help you move houses in July. Into a building with no elevator. And you picked a fourth floor apartment.... Did you mention your brick collection?

Happy May all!
Annette Noyes
The Emerald Box Turtle
www.theemeraldboxturtle.com

A Time of Renewal and Growth 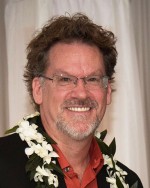 Happy Spring! Yes, even here in NE Ohio, despite the start and stop and start and stop of the nice weather, Spring has officially arrived. Life is beginning anew. Just look out your windows and you’ll see the beauty of nature coming back into bloom. The earth is being renewed.

While the blossoming of a daffodil looks so gentle, not all growth and renewal is painless.

Like most people, I am trying to grow and renew my spirit all the time. I want to improve in all ways and I want to bloom. But it can be a very painful process at times.

We’re told that the best teacher is failure and it’s true. Sometimes the best way to learn a lesson and to grow is to stumble and fall. When that happens, you just have to get back up, brush yourself off and continue on. 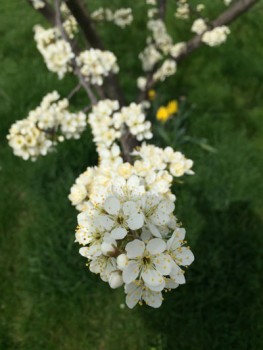 Hopefully we have learned a lesson so we can avoid falling in quite the same way in the future.

We all fall. We all fail at times. But it’s what we do with that experience that determines whether or not we grow, or bloom. If we choose to examine what why it was that we tripped and stumbled, then we can learn a valuable lesson and grow.

But of equal importance is that we try to help each other to learn and to grow. When someone stumbles, we should offer a hand to help them up when possible. Together, we can ease the pain of learning hard lessons. And we can encourage each other to grow.

One thing I often see is jealousy or resentment. Both emotions are poisonous to our own soul. Rather than being envious and resenting that someone else succeeded and we haven’t, we should rejoice and celebrate their success. When we open our hearts and truly experience that joy, our opened hearts will allow more positivity and more success for ourselves.

The late and great Carrie Fisher once said, “Resentment is like drinking poison and waiting for the other person to die.” Exactly. Don’t poison yourself with that negativity. Positivity is what helps us to grow. The more positive we are, the more we are open to renewal, rejuvenation and growth.

This past January, the project to get Pat Montandon and Children as the Peacemakers to North Korea to meet with that country’s leader began in earnest. The goal is to be invited to there to discuss peace and nuclear disarmament.

Ms. Montandon wrote a letter to Kim Jong-Un, which is attached here: 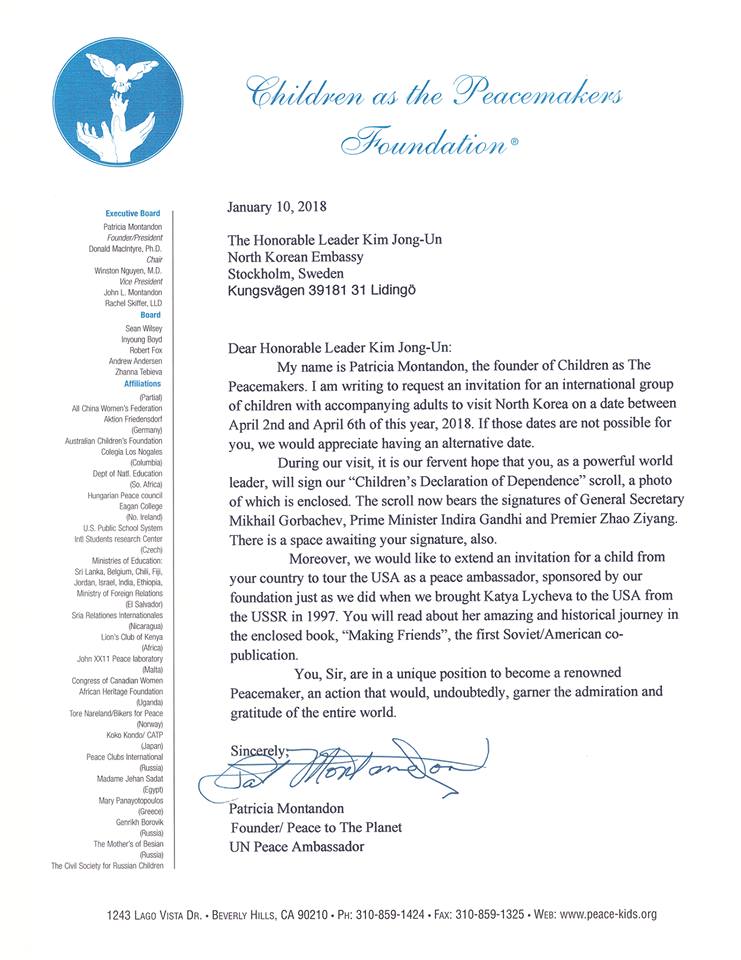 And look at what’s happening in the news now! Kim Jong-Un has agreed to declare peace between North Korea and South Korea and nuclear disarmament; a truly historic event!

Did Ms. Montandon’s letter bring this about? We don’t know. But the timing is incredible, don’t’ you think? And we’re hoping that with this renewed, kinder side of Kim Jong-Un may allow for that much desired invitation to North Korea that we’ve been hoping for.

I hope you’re all enjoying the springtime renewal. And I hope that you’re each experiencing great blossoming in your own lives. 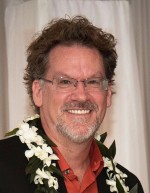 If you recall, in the March newsletter we announced that Great Conjunction Spiritual Center would be working with another very important non-profit.  Specifically, I was going to California to work with Children As The Peacemakers. Well, I am back! And I can tell you that we worked very hard to get some amazing projects moving forward.

As a gentle reminder, Children As The Peacemakers (CATP) is an organization dedicated to making peace happen, as well as push for nuclear disarmament, through the creative participation of children from around the globe. 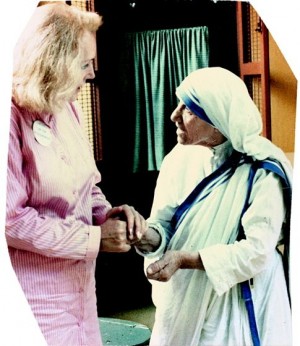 CATP’s founder, Pat Montandon, an author, humanitarian and activist who has devoted her life to making our world a place of peace, hope and love, founded Children As The Peacemakers in the early 1980’s.  She took children from around the world on 37 different global trips to meet with world leaders. President Reagan, Russia’s Mikhail Gorbachev, Indira Gandhi of India, German Chancellor Kohl, Mother Theresa, Pope John Paul II and China’s Premiere Zhao Ziyang are just some of the leaders who met with Ms. Montandon and the children.

Now, in 2018, the threat of war and nuclear arms is, once again, a terrifyingly real one. Something needs to be done and frequently, grass-roots operations make a huge difference.

Because of this, Ms. Montandon has come out of retirement and is planning a new trip to pursue peace. This time, she’s intends to take a small delegation to meet with North Korea’s Supreme Leader Kim Jong-Un.

The trip is just one of the projects to which much of the time was devoted. Additional projects have presented themselves as well. That’s why, what began as a two-week trip to California turned into a four-week trip. 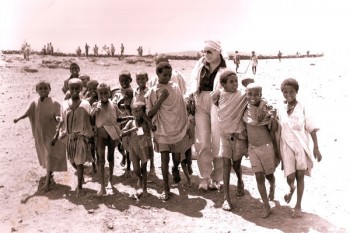 Other projects that needed attention include, but do not end with, building a new website for CATP, a documentary being produced on Ms. Montandon’s life and a film that is being made of one of her books. These projects required detailed work in the extensive archives for CATP, which include hundreds of files, countless photographs and untold hours of film footage from those 37 trips.

Naturally, when working on any project, you expect some sort of bump in the road along the way. We had our share of those, too. One of which is trying to find a way to legally get a letter to Kim Jong-Un since the U.S. has sanctions in place that make it illegal to send mail to North Korea.

Working with Ms. Montandon for a month was an amazing experience. The many lessons learned and ideas to bring back to Great Conjunction are priceless. The entire experience was rewarding beyond measure both professionally and personally. We were friends before this trip, but the bond that developed between us is very precious to me. For over forty years I’ve known that she was an amazing woman. Now I know just how special and unique she truly is. 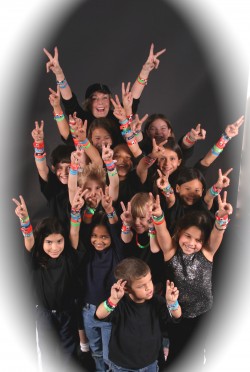 I will be eternally grateful to John, my husband and Great Conjunction’s co-founder, to his patience while I was away and his unwavering support, allowing me to have this experience. I will always be grateful to Pat Montandon for the lessons, the experiences, the knowledge, the work and the love.

I feel like a better man because of it. And I discovered this past weekend that I am now a better teacher than before. I’ve taught many classes in Reiki, but the class held on March 31st was phenomenal. I had five amazing students, but I also had more to bring to the table and, at least for me (and hopefully for the students), it was a much richer experience.

And thank you to all of you, our Great Conjunction members and extended family. Your support, encouragement and enthusiasm are invaluable. I hope you liked the videos I sent from California.

As a reminder, four of Ms. Montandon’s books are available through Great Conjunction and each of them are autographed. You may obtain copies at our psychic fairs or contact us direct. You can also get copies at our Sacred Empowerment Circle for Women on Thursday, April 26th as well as other classes, lectures and workshops.

Autographed books are available for a suggested donation of $20 each. Here is a list of the books we have:

Watch for the beautiful Springtime flowers that are beginning to pop up all over the place!

Joe Thornton is spending some time working with and learning from Pat Mondaton and her non-profits Children as the Teachers of Peace.

Quick Updates from Joe and Pat!

Subscribe to our Youtube Channel for more videos to help you find peace and spiritual growth from Great Conjunction Spiritual Center!

Joe Thornton is spending some time working with and learning from Pat Mondaton and her non-profits Children as the Teachers of Peace.

Joe and Pat are working on a number of new projects for CATP including a documentary, trip to North Korea and more!

Subscribe to our Youtube Channel for more videos to help you find peace and spiritual growth from Great Conjunction Spiritual Center!