I was 18 when I first read about Terry Pratchett’s witches.  Wise women, often kind and sometimes cross,  who guided their communities with a soft, but stern hand.  I knew these women, I was surrounded by some of them.  Spirits in human form who never did “magic”, but knew about herbs, plants, healing and food.  How to make a handful of nothing and the herbs from the yard into a nourishing meal that an 80’s boy couldn’t turn up his nose at.  One of those witches (never call her that to her face) was Phyllis and she lived next door. 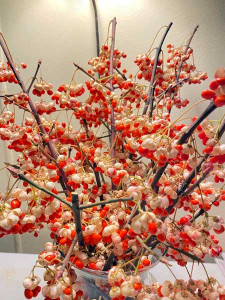 Phyllis was retired from the phone company.  She scoured antique markets and auctions, she cooked, gardened, and turned her yard into a shady haven where roses with apple scented leaves grew, honey scented yellow flowers peaked through the snow, and treasures were hidden round every curve of the path.

It was my final year in college when she predicted her death.  She was recovering from a second bout of cellulitis and said quite confidently, “If a third round comes, that will be the end.”  When she saw the look on my face she hastily walked it back, but by the following summer she was gone. 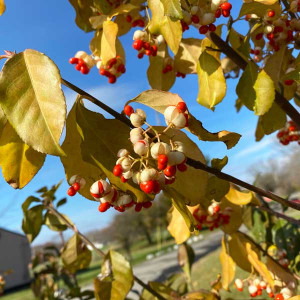 was away when she passed, living in the pavement paradise of Queens, with only a few small patches of dirt to visit in my neighborhood.  I didn’t feel her passing, but on my next visit home, her nephew offered me some of her cookbooks and I eagerly accepted the oldest and the strangest he was willing to give.  That’s when I felt her, hovering around those well loved books that were stuffed in the closet (much like me at the time), waiting for someone to give them the love they needed.

I had just bought my first house the next time I felt her presence.  I was standing behind my new (to me) house, searching for ways to make it feel private and safe when I saw her standing in the shade of a tall, narrow yew.  For just a moment, I saw the land transformed with gentle evergreens and shady curves cupping the house; shielding it away from prying neighbors and chaotic energies. 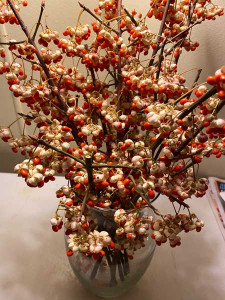 I only saw her a few more times in the 14 years we lived in that house, always standing in the shade of a tree - looking content and just a bit proud.

It was this fall I felt her again, for the first time in years.  I have been struggling with this new yard.  It’s a tidy little suburban yard that needed nothing, but a bit of trimming to be nice and tidy.  I hated it and immediately began making a chaotic mess as I third to figure it out (my Father-in-law hated that).

I didn’t know what to do or where to start (I mean, I started a compost pile.  I’m not a monster.), but all I had done was plant some annuals and start the veggie garden.  This year the scrubby, vining shrubs scattered around the yard grew thick and lush, finally showed me what they are: Phyllis’s beloved Bittersweet.  She struggled with this plant and never had more than a bit growing in the hedgerow, but she would cut the colorful berries every fall and decorate and much as she could.  I always planned to plant some in her honor, but here there are, growing with a newfound vigor after hiding what they were for our first few years together.

Cupping the orange berries I knew Phyllis had taken an interest in this new patch of land where my herbs grow like never before and shade dapples the grass.

American or False Bittersweet (Not to be confused with bella donna, also called bittersweet) is a twining shrub with flame colored small berries in the late fall.  Toxic if ingested to dogs, cats, horses and people, it is rarely used by herbalists anymore, but was once used to treat bowel obstructions, late menstruation and skin blemishes. This is no longer recommended! The berries can cause severe bowl cramping and pain.  However, birds love the berries.  It dries easily and is beautiful in arrangements and the autumn landscape.