A Valentine To My Father

My father had only one child.  He loves me. 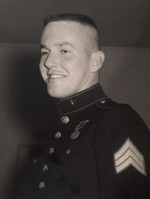 I’m told that when I was in my crib, my dad, who was born bow-legged, used to pull the covers back, look at my legs and thank God that they were straight.  I’ve also been told that when I was focused on an activity, such as getting on the floor and playing with the dogs, and unaware of my father, he would stare at me with a look of what’s been described as a blend of love and pride. 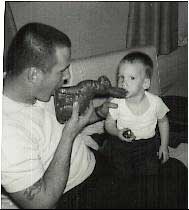 As an infant, I bonded with my father more than I did my mother.  My first memory is of him.  My parents split when I was just three-years old and I remained with my mother.  I stopped eating and would get violently ill when I was forced to eat.  I missed my daddy.  Within a few months I was living with him and was subsequently raised by my father and step-mother.

Dad was always strong, proud and tough.  He was a police officer and he worked a lot and wasn’t home as often as he or I would have liked.  But he always tried to give me a good life, a better life than he had. He had always wanted a horse so when he could afford it, he got one for each of us and we used to go riding together at least once a week.

Throughout my childhood, there was a local late night horror movie show on Friday nights.  When he was not working, my dad and I would spread sleeping bags on the living room floor and spread pillows.  I’d grab my favorite teddy bear and we’d snuggle in and stay up late watching monster movies.

When we moved cross-country, Dad insisted we move into an affluent neighborhood because the school there was supposed to be the best.  We were far from affluent.  While we lived there, Dad couldn’t find work that paid more than minimum wage, so after one year of enjoying that very nice neighborhood, my parents burned through their life savings and we had to move.

My dad and I have always been very close.  We’ve laughed a lot and have done as many things together as possible.  He taught me how to go crabbing, took me deep sea fishing and taught me how to drive.  We often went for jeep rides in the mountains.  We had fun.  I really like him.  He is my friend.

Time has moved on and, while Dad and I are still close, things have changed quite a bit.  I’m now in my mid-fifties and married, he’s in his early eighties and a widower.  He’s no longer able to stand or walk and gets around in an electric wheelchair.  He frequently has trouble sitting up without assistance and cannot get out of bed on his own.  Some days are good days, more of them aren’t so good. 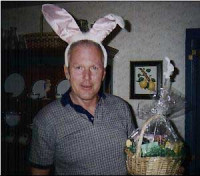 Our daily late morning ritual is for John and I to get Dad up.  We pull the covers back, sit him up, change his Depends, clean him up, dress him and transfer him to his wheelchair.  I have to make his coffee for him and we cook all his meals.  Every day we have to change his bed and wash the sheets from his nightly accidents.  He’s my dad.  I’m honored to be able to do these things for him.  I love him.

On good days, despite the obvious physical changes in him, he’s still Dad.  While he needs help, despite his embarrassment and frustration, he’s patient and understanding.  And funny.  He’s just Dad.

On bad days, which are coming with more frequency, he has tremendous difficulty with his motor functions.  He’s like a rag doll and can hardly even hold a fork or spoon and eating a simple omelette can take a couple of hours.  Worse, he’s in a deep mental fog and can’t think clearly.  Sometimes he thinks he’s holding an object or doing something that he’s not doing.  He sleeps almost constantly.  On those bad days he has no sense of humor.  My dad’s not there and I miss him.

Actually, I miss my dad a lot.  I miss his often-imposing size and his strength.  I miss going to do things with him beyond doctor’s appointments.  I miss laughing with him and being silly.  I miss my friend.  I miss my dad.

But life goes on.  Our roles have changed but goodness knows so have we.  I’m glad that we’re still together.  And we laugh together.  He’s still my father.