“What lies behind us and what lies ahead of us are small matters compared to what lies within us.” Click to Tweet

This quote has been attributed to many different people over the years and if you do a search for it, you will find conflict regarding the origins. I have a theory about this sort of situation, let me share this with you now. I believe in a collective consciousness. 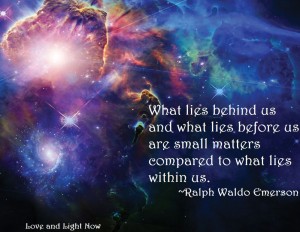 I believe that ideas often come from a larger place outside of our minds, to which our spirit connects. Call this collective consciousness, a muse, angels, God, organized intelligence, call it anything you like. I would like to insinuate that there exists a larger energetic thought form than our individual brains. I would like to further hypothesize that somewhere out “there” are also particles and ideas that are simply genius, floating around, waiting to be tapped into. That being said, we can often tap into these genius thoughts by allowing them to touch us randomly, or by creating a serene platform inside that may allow them to be cast upon us in some heavenly inspired moment.

Perhaps like a broadcast from some genius radio station somewhere out “there”.  My hypothesis is that perhaps if we go within, we can create a space for the magical to alight within us.

Now, on to the quote. Ask yourself what worrying yourself about the past or the future can bring you in this moment? I would say; the inability to focus on the gift that this “present” moment has to offer. Did you ever ask yourself why we call this moment the “present”? I read somewhere it is called the present because it is A present. A gift that will never come again. If in every moment lies the great potential of a gift, are you open to receive it?? If the universe has a gift for you this moment, and you are so busy worrying about tomorrow, that you cannot receive the genius that may be buried within the “present”?

I implore you, dear reader to cultivate an inner experience of serenity such that the mystical can alight within YOU. Meditation, even in minor increments would go so far to help you achieve that inner sense of serenity. If you need help, look for a meditation class, or join a meet-up group or use YouTube.

Read more: "What lies behind us" - That's What They Say- Thought provoking insights on common quotations

“And the day came when the risk to remain tight in a bud was more painful than the risk it took to blossom.”

That's What They Say- thought provoking insights on common quotations

“And the day came when the risk to remain tight in a bud was more painful than the risk it took to blossom.”  ~ Anais Nin Click to Tweet

A flower blossoms, it grows and blossoms, every flower has two very clear jobs encoded within its DNA. A flower comes into being with a few goals and effortlessly fulfills its purpose without so much as a brain.

When a flower blossoms, it leaves the world an infinitely more beautiful place.

We humans could take a few hints from our friend the simple flower: We could try to keep things simple, allow ourselves to be more focused on our growth and life purpose. To allow time to ponder these thoughts daily would be a perfect way to begin to allow either growth or life purpose to unravel. (Guided Imagery, meditation or time spent in communion with silence are helpful techniques for personal development.)  If we humans took the risk to blossom, we as well would leave the world a more beautiful place.

Read more: “And the day came when the risk to remain tight in a bud was more painful than the risk it took to... 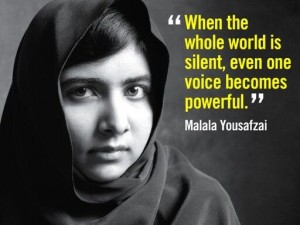 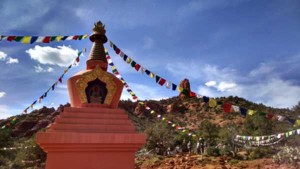 Read more: When the whole world is silent, even one voice becomes powerful.

“When you hold on to your history you do it at the expense of your destiny.” – TD Jakes Click to Tweet

This quote really made me stop and think for a moment! Watching people, I notice patterns, and I have to say, we are often so focused on our own past experiences, hurts, regrets and failures. I understand this tendency, because come on, what else do we draw from? However, the more we think about our pasts, the more we dwell there. Spending time in our memories does not allow us to move forward in the business of life (making new experiences).

Making new experiences is the juicy mindset of the adventurer. Don’t you want to be an adventurer? If you cling on to the past, you could prevent yourself from being open to receive new experiences. If your cup is already full, nothing new can fit. Let go of yesterday to make more room. If you want to know some good ways to be open, here are some suggestions: Watch your thoughts, attitude and behaviour. You are the only one who can control them. You can train your mind to be in the moment, by merely focusing on your breath. Seriously, listening to your breath is a wonderful way to get you out of your head and into the present moment. Go for a quick walk outside. Wonder at a cloud or a leaf or a bird, share your gratitude of nature’s wonders. Gratitude works almost instantaneously to bring you into the moment.

Allow your destiny to unravel by being open to what the Universe is presenting to you right now! If you take the time to notice the signs, life becomes a magical adventure, and you hold the compass. Click to Tweet

Read more: When you hold on to your history you do it at the expense of your destiny

That’s What They Say...Thought Provoking Insights on Common Quotations

"I was told to challenge every spiritual teacher, every world leader to utter the one sentence that no religion, no political party, and no nation on the face of the earth will dare utter: 'Ours is not a better way, ours is merely another way."
~Neale Donald Walsch

Rev. Rivera’s insight on this quote:

There is a very important turning point on every person’s Spiritual path when they may choose to begin to take responsibility for themself and become willing to change themself. At the beginning stages of every journey, people still have some insecurity, so they look for spiritual teachings that make them feel good, tell them what they want to hear and don’t challenge their existing beliefs too much. I mean, come on let’s face it, we ALL like to be comfortable. Comfort seeking is natural, but I feel there is a limit to how much you can grow as long as you maintain this approach.

As you become a more mature seeker, you may begin to realize the fundamental mechanism behind all true channelings/messages. The simple fact is that there are in existence, beings that have a higher state of consciousness than you do. Thus, your advantage of studying teachings that challenge you can help you see what your ego does not want you to see, or hear what your ego does not want to hear.

I feel that  mature seekers deliberately seek out teachings that challenge their most cherished beliefs. As you mature, you begin to realize that the divine teachings challenge your beliefs, thus compelling you to reach beyond the ego’s dualistic understanding. As the world evolves spiritually, many seekers are awakening from soul darkness and beginning to step slowly away from body-centered ego-consciousness. Instead of identifying as mere physical bodies that are born and die, we begin to see ourselves as spiritual beings having a human experience.

When I talk about challenging your beliefs, you may find that there are many more truths that connect ALL beings, regardless of your Spiritual path, political path, ethnicity, or sexual identity. Truths that unite us rather than divide us. I ask you to seek higher truths in your personal progression and on the path of your soul’s evolution so that we ALL may become closer and more accepting of one another. Click to Tweet