Monday morning our beloved dog Dart passed away at home.  Joe and I were with him and he was held and loved as he passed, he had been with us twelve and a half years. 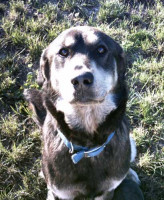 It was a dark and stormy night when I found Dart lying huddled in the rain next to my driveway. The headlights from the car illuminating a skinny, wet dog with big brown eyes and floppy ears.  I did not want a dog, but I dried him off and gave him some fresh water and a place to sleep on the porch resolving to find his owners in the morning. 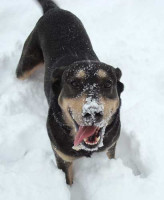 He was full grown when his showed up with a blue collar and no tags.  I started asking the neighbors and my dog loving mail carrier, Mary, checked her whole route, trying to find his owners.  When I would tell him, “Go home!” he would just look at me.  After a few days of him living on my porch, not inside because I did not want (and could not afford) a dog, Mary said, “I think you have a dog, you should get him to a vet.”

My parents and my friend Sherry helped me out with a few bucks for the Vet and suddenly I had a dog, a very quick dog, who happily responded to Dart – Dartanian when I was feeling pretentious.

He wasn’t very well trained at first, but he learned fast, except he kept peeing on the potted tree in my bedroom.  So one day I hid in the closet so I could jump out and catch him in the act.  He never peed in the house again.

I quickly came to believe Dart was sent to me to be my protector, maybe my familiar, but he was definitely a faerie dog.  The strange spirits that would float through the neighborhood dispersed when he was around, nervous clients quickly calmed and the groundhogs stayed out of the garden. He even helped a few friends who were afraid of dogs, especially big dogs, past their fears.  It was rare for him to dislike someone, but I always listened when he did. 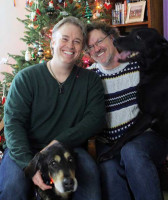 Over the last few years he started slowing down, but he could still disappear when he wanted to, and he still tried to patrol the boundaries of the yard.  Around Christmas we started carrying him up and down the stairs as he grew weaker, unless he darted around us and got to the stairs first.

Monday morning he was gone. He was my first dog and the very best Dart in the world.