I hope you had a nice holiday and were able to safely celebrate. 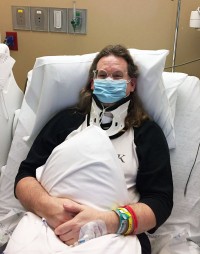 I want to thank you all for being so kind and keeping me in your thoughts while I’ve been going through the “challenge” I wrote about last month.

In case you either forgot or didn’t read the June newsletter, I had spinal surgery and a fusion of three vertebrae in my neck.  And basically I was anxiety ridden, so I vented in writing to you about it.

As anticipated, my surgery went very well; the doctor was quite pleased.  And I was only in the hospital for 31-hours!  (Not that I was counting or anything.)  My surgery was scheduled for first of the day so we got to the hospital at 5:00 a.m. and within 40-minutes I was taken back for prep. 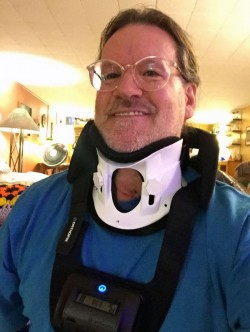 I’m not ashamed to tell you that my inner child I wrote about last month was really scared.  Actually he was freaking out.  Naturally I unsuccessfully hid my anxiety by overcompensating and being a blithering idiot talking my head off to the nurse.  Luckily for me she didn’t mind and we actually had a really nice conversation.  And that was actually what I was hoping for.  My little plan worked.  Make the nurse like me so she’d be as gentle as possible when putting the IV into me.  And she was very gentle.

Once I was prepped for surgery they allowed John to come back and sit with me.  So his was the last face I remember seeing before I went to sleep. 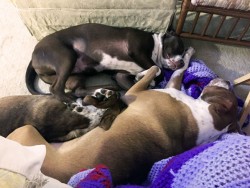 I’ll tell you a little secret.  After watching who knows how many TV shows that showed operations and such, I’ve always been really curious about surgeries and operating rooms in real life.  So when they were wheeling me to the operating room, I was a little excited.  But the last thing I remember is staring at the ceiling as we went into a room and asking the nurse where we were.  She said it was the operating room and then there was nothing.  No sound.  No light.  Not a single thought.  I was unconscious that fast.  So I never got to see the equipment, the doctors and nurses in scrubs or anything.  I got gypped!

My next memory was being told I was in the recovery room then more of nothing.  Next I was being wheeled to my room and John was walking along with us.  Soon after, they gave me morphine and not much mattered after that. 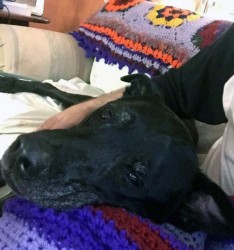 So now I’m three-weeks out from the surgery and, generally speaking, I’m doing okay.  I have to wear a hard brace on my neck that I can only remove for showers.  Plus for four-hours each day I have to wear a harness-like contraption that stimulates bone growth.  I look like I’m wearing a Star Wars Stormtrooper starter set! 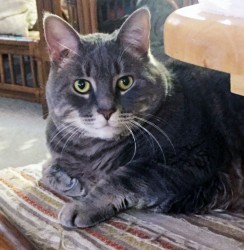 The pain is still pretty intense at times.  Luckily the incision has never been a problem.  The pain is in the bones in my neck and because my spine is beginning to heal, the nerves in my right arm are working overtime.  The slightest touch or even just the weight of an afghan is so painful I think I see God.

Since I’m so restricted in my movement, these days I’m living on the couch.  I have the best caregiver.  John is there for anything and everything I need and appropriately gives me an earful when I do something I’m not allowed to be doing… like bending down to pick something up.  Plus I have four adorable dogs and a couple of cats surrounding me constantly.

Now we just have  to be patient as I continue to heal.  And it’s going to take some time to heal and to grow new bone, too.  In hindsight, being patient is more difficult than getting through the surgery.

As for that inner child of mine that was so scared to be stuck with needles and cut open, well, as expected, he did pretty well, too.  He’s just still disappointed he didn’t get to see the cool operating room and all the neat stuff.