It’s May, already, and we’ve three holidays fast approaching.  Despite our current situation of self-quarantine, let’s keep celebrating in whatever ways we can.  Afterall, despite some of the traditional ways we’re used to celebrating, all three of the May holidays are truly of the heart: 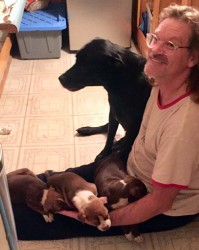 It’s a lot of fun to be together on these occasions, but it’s not a requirement.  One option is to postpone those bar-b-ques and picnics and those happy hours.  We can also do them online with our cams.  We just need to be a little more creative than usual; grow and be more flexible with how we do things. 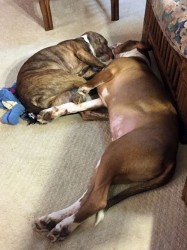 And that’s what we at Great Conjunction are trying to do with our upcoming events; be creative.  Though we’ve cancelled several of our events already, we’re finding new ways to carry on. Our May 19th workshop with Rev. Rachel Hollander titled “Who Booked This Trip?!” is still going to happen.  We’re moving it into the virtual world and holding it online.  But more about that elsewhere in the newsletter.

But I’d like to focus now on the line from that old poem that read, “April showers bring May flowers”.  And while that’s pretty true, I’d like to take a broader view of those May flowers.

The one of the most immediate and obvious forms of growth that I’ve been watching are our three puppies.  We got them just over four months ago.  They were only about 3-month old at the time and they were tiny little things.  Judging by their markings and a few other indicators we had, I figured they’d grow up to be comparable to each other in size and probably only a couple feet tall. 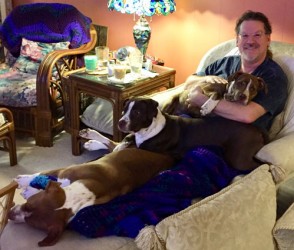 I was wrong.  On both counts.

Our female, our little princess Leia, who we always suspected was the runt of the litter and malnourished, is still the smallest of the three, but she is growing nicely.  One of the boys, Finn, is just a little bit bigger than Leia. However, the third one, Poe, has exceeded all expectations.  He’s growing like a weed and is substantially larger than the others.  He’s big.  He’s a tank.  He’s adorable, but he’s big!  Poe is nearly 1/3 larger than Leia.

When we first got them, all three could fit on my lap.  Now… not so much.  And when they do lay on your lap, you’re pinned to the spot!

They’re absolutely adorable, loving and playful.  And inseparable.  They cannot stand to be apart from one another, even briefly.  And they still sleep in a puppy-pile.

May is full of growth.  Grass, trees, blossoms, our puppies and the way we do things.  Keep creative and keep safe.  And we’ll see you at our first virtual workshop!