I promise, no April Fool’s jokes here.  You’ll be getting enough of those from other people.  I’d like to share with you a long-running April Fool’s gag from my family. 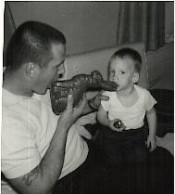 When I was growing up, my grandmother would cook a big roast and we’d all go over to her house for dinner.  One year, that dinner fell on April 1st.  My father called her up and said, “Your roast is burning!”  My grandmother panicked, hung-up the phone and raced to the kitchen only to find out that all was well with the roast.  My father immediately called her back and announced, “April Fools!” and everybody had a good laugh.  Subsequently, every April 1stthere after, he called her and told her that her roast was burning… and she fell for it.  Well, at least for the next five or six years.  But the called became tradition and everyone looked forward to it.

Another tradition in our family was the annual Easter basket hunt.  It wasn’t a simple seek and find situation at all.  It was a true challenge.  Ever year my mom would hide my Easter basket and write a series of clues that I had to solve in order to find the treasure.  She would hand me the first clue and once that was solved, it would lead me to the next clue and so on until I triumphed. 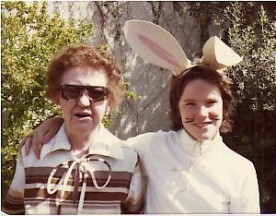 The hunt would usually take about an hour or so and sometimes the clues would be very easy or obvious, but there were always some that were real stumpers.  But the event was one that everyone looked forward to, including all the adults.  In fact, it was so much fun for everyone, one of my aunts begged to be allowed to participate, so the following year, we both had our own set of clues to follow.

One of my favorite clues was, “Go to the fork in the road”.  Now, we lived on a small, long, straight road.  No forks.  But at the end of our driveway, along the berm of the road, Mom had stuck a fork in the ground and laced within the tines was the next clue.

Despite pranks and even without clues leading to chocolates, spring is a beautiful time of year.  The trees are budding, the grass is greening and the flowers are starting to bloom.  We can start opening windows to let the fresh air inside and going for walks. It’s magnificent!

Being that it’s April, traditionally we’re looking forward to the April showers that bring May flowers. And when it rains, we can get pretty wet.   But we all have umbrellas and we carry them inside.  That internal umbrella is joy.  We all have it inside of us and we all know how it feels.  The more we allow ourselves to feel joy, the better a place the world… and our lives… will be. 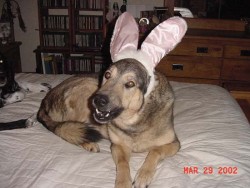 What’s my joy?  It sure isn’t the big things in life.  While the big things do bring some happiness, it’s the little things that bring the most joy.  I experience joy when, for no special reason, my husband does something just a little special just because he wants to see me smile.  And it’s not that special something I smile about… it’s his desire to see me smile.

For me, joy is feeling the warmth and the weight of my dog Helo’s head resting on my foot as I type this. It’s anticipating the blooming of the daffodils out in the yard and the taste of my lunch yet to come.

What brings you joy? Notice it.  Celebrate it.  In fact, let’s all celebrate our joy every day.  Let the joy in you blossom.

And here’s hoping that your roast isn’t burning!